Archive for Employer Knowledge Base 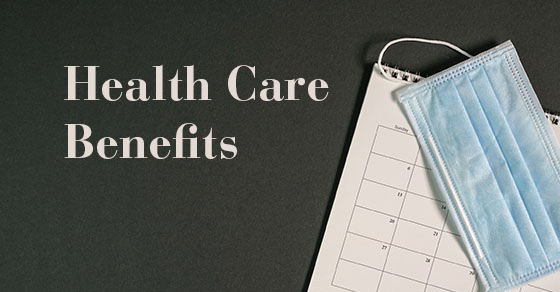 The latest on COVID-related deadline extensions for health care benefits

The U.S. Department of Labor (DOL) recently issued EBSA Disaster Relief Notice 2021-01, which is of interest to employers. It clarifies the duration of certain COVID-19-related deadline extensions that apply to health care benefits plans.

The DOL and IRS issued guidance last year specifying that the COVID-19 outbreak period — defined as beginning March 1, 2020, and ending 60 days after the announced end of the COVID-19 national emergency — should be disregarded when calculating various deadlines under COBRA, ERISA and HIPAA’s special enrollment provisions.

The original emergency declaration would have expired on March 1, 2021, but it was recently extended. Although the agencies defined the outbreak period solely by reference to the COVID-19 national emergency, they relied on statutes allowing them to specify disregarded periods for a maximum of one year. Therefore, questions arose as to whether the outbreak period was required to end on February 28, 2021, one year after it began.

Notice 2021-01answers those questions by providing that the extensions have continued past February 28 and will be measured on a case-by-case basis. Specifically, applicable deadlines for individuals and plans that fall within the outbreak period will be extended (that is, the disregarded period will last) until the earlier of:

Once the disregarded period has ended, the timeframes that were previously disregarded will resume. Thus, the outbreak period will continue until 60 days after the end of the COVID-19 national emergency, but the maximum disregarded period for calculating relevant deadlines for any individual or plan cannot exceed one year.

The DOL advises plan sponsors to consider sending notices to participants regarding the end of the relief period, which may include reissuing or amending previous disclosures that are no longer accurate. Sponsors are also advised to notify participants who are losing coverage of other coverage options, such as through the recently announced COVID-19 special enrollment period in Health Insurance Marketplaces (commonly known as “Exchanges”).

Notice 2021-01 acknowledges that the COVID-19 pandemic and other circumstances may disrupt normal plan operations. The DOL reassures fiduciaries acting in good faith and with reasonable diligence that enforcement will emphasize compliance assistance and other relief. The notice further states that the IRS and U.S. Department of Health and Human Services concur with the guidance and its application to laws under their jurisdiction.

Plan sponsors and administrators will likely welcome this clarification but may be disappointed in its timing and in how it interprets the one-year limitation. Determinations of the disregarded period that depend on individual circumstances could create significant administrative challenges.

In addition to making case-by-case determinations, plan sponsors and administrators must quickly develop a strategy for communicating these complex rules to participants. Contact us for further information and updates. 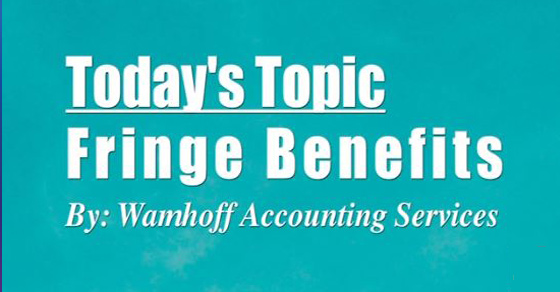 Today we’re focusing on Fringe Benefits, and what plan may be right for you, including the difference between an accountable plan and a non-accountable plan, and Section 125 plans. 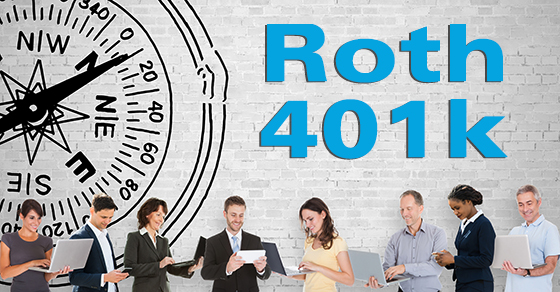 Would a Roth 401(k) plan suit your employees?

Roth 401(k) accounts have been around for quite a while. But many employers still don’t offer them and many employees still don’t understand them. As the name implies, these plans are a hybrid — taking some characteristics from Roth IRAs and some from traditional employer-sponsored 401(k)s. When considering (or reconsidering) your retirement plan options, look into whether a Roth 401(k) would suit your employees.

The ability to contribute to a Roth IRA is phased out for higher-income taxpayers, but there’s no such restriction for a Roth 401(k). This can make Roth 401(k)s particularly attractive to employees with higher incomes who’d like to take advantage of Roth benefits.

In general, qualified distributions are those made after a participant reaches age 59-1/2, or made because of death or disability. Therefore, employees can take qualified Roth 401(k) distributions after age 59-1/2 and pay no tax, as opposed to the hefty tax bill that may be due from traditional 401(k) payouts.

And unlike traditional 401(k)s, which generally mandate required minimum distributions (RMDs) after age 70-1/2, Roth 401(k)s have no RMDs (except for beneficiaries who inherit them).

Data indicates that the popularity of Roth 401(k)s is increasing. For example, survey results released by global consultancy Willis Towers Watson earlier this year revealed that 70% of responding employers now offer Roth features within their 401(k) plans. That’s a notable rise from results of the firm’s earlier surveys — namely, 46% in 2012 and 54% in 2014. We can help you further explore the benefits, risks and overall feasibility of adding a Roth 401(k) to your benefits lineup. 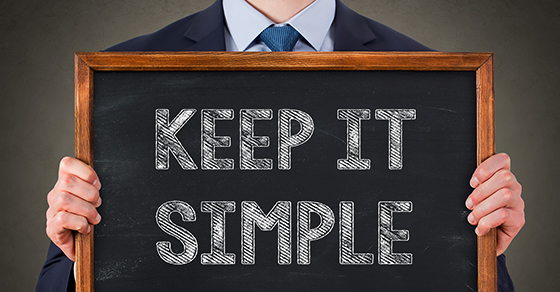 Starting slow with a SIMPLE IRA

For certain employers, particularly small businesses, introducing a retirement plan for employees may seem like a daunting task. The company owner may feel that providing a full-blown 401(k) plan is his or her only choice, but that’s far from true.

There are other options to consider that are relatively easier to administer and usually less costly to set up and maintain. One such plan is a SIMPLE IRA.

The acronym SIMPLE stands for “Savings Incentive Match Plan for Employees.” (And, of course, IRA stands for “individual retirement account.”) The concept behind these plans is to allow employers with 100 or fewer employees to provide a retirement plan without running into the often-confusing complexities of 401(k) plans. A SIMPLE IRA may even be a viable option for self-employed individuals.

Naturally, these plans still have some requirements and restrictions. Although eligible employees may contribute to their accounts themselves — which isn’t the case for pensions, for example — those annual contributions are less than those allowed for 401(k)s. In 2018, an employee can contribute up to $12,500, or up to $15,500 if the employee is 50 or older. (As of this writing, these amounts for 2019 had not yet been announced.)

There’s also a required match from the employer. Generally, you must choose between:

If you have no plan, you might want to consider a SIMPLE 401(k) plan. These are like SIMPLE IRAs when it comes to contribution limits and employer matching, but participants in a SIMPLE 401(k) may take out loans. Some organizations have employees who really appreciate this feature, though it makes plan administration a little more challenging for the employer.

Under either of the SIMPLE offerings, employers avoid the nondiscrimination tests — a key component of regular 401(k) plans. (These tests, which involve a calculation based on the organization’s employees, may serve to restrict the allowable contributions of higher-earning employees unless there’s a sufficient level of participation by those earning less.)

Please note that the deadline for setting up a SIMPLE IRA for 2018 has already passed. But you could begin exploring the idea now with an eye toward establishing this or another retirement plan for your employees for next year. To discuss further, please contact us. 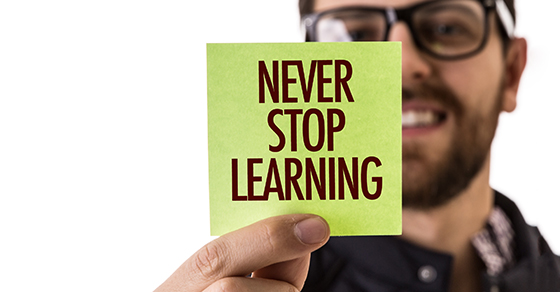 Get serious with an educational assistance program

Most employers probably know that reimbursements and direct payments of job-related education costs are excludable from workers’ wages as a working condition fringe benefit. Maybe you’ve offered such a benefit in the past and it’s worked out well for everyone.

But if you’re ready to really get serious about promoting the professional development of your employees — and doing so in a tax-efficient manner — consider establishing an educational assistance program.

An educational assistance program can cover both job-related and non-job-related education. Assuming it meets eligibility requirements, such a program can allow employees to exclude from income up to $5,250 annually in education reimbursements for costs such as:

The IRS, however, won’t allow reimbursement of materials that employees can keep after the courses end (except for textbooks). You can deduct up to $5,250 of educational assistance program reimbursements as an employee benefit expense. And you don’t have to withhold income tax or pay payroll taxes on these reimbursements.

To pass muster with the IRS, such a program must avoid discrimination in favor of highly compensated workers, their spouses and their dependents, and it can’t provide more than 5% of its total annual benefits to shareholders, owners and their dependents. In addition, you must provide reasonable notice about the program to all eligible employees that outlines the type and amount of assistance available to workers.

Another “hidden” advantage to reimbursing education costs is attracting new hires and retaining them. The labor markets in many industries are competitive right now, so it’s important not to overlook ways to differentiate yourself from other companies looking to hire from the same pool. Moreover, keeping an engaged, well-trained staff in place enables you to avoid constantly enduring the high costs of hiring.

Also bear in mind that Millennials make up a significant portion of the labor market now. This generation has its own distinctive traits and preferences toward working — one of which is a need for ongoing challenges and education, particularly when it comes to technology.

Keeping them on board

If your organization’s employees want to take their professional skill sets to the next level, don’t let them go to a competitor to get there. By setting up an educational assistance program, you can keep your staff well trained and evolving toward the future while saving taxes. We can help you further explore setting up such a program and its tax advantages. 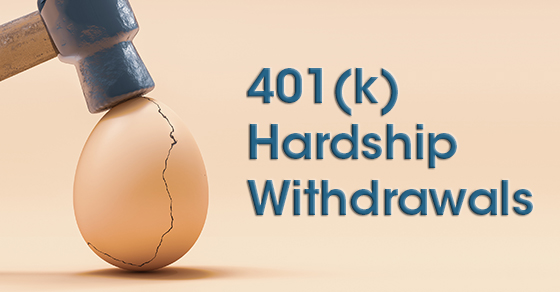 Many employers sponsor 401(k) plans to help employees save for retirement. But sometimes those employees need access to plan funds well before they retire. In such cases, if the plan allows it, participants can make a hardship withdrawal.

If your organization sponsors a 401(k) with this option, you should know that there are important changes on the way next year.

What will be different

However, important changes take effect in 2019 under the Bipartisan Budget Act of 2018 (BBA). First, employees’ withdrawal limits will include not only their own contributed amounts, but also accumulated employer matching contributions plus earnings on contributions. If an employee has been participating in your 401(k) for several years, this could add substantially to the amount of funds available for withdrawal in the event of a legitimate hardship.

In addition, the BBA eliminates the current six-month ban on employee participation in the 401(k) plan following a hardship withdrawal. This means employees can stay in the plan and keep contributing, which allows them to begin recouping withdrawn amounts right away. And, for you, the plan sponsor, it means no longer having to re-enroll employees in the 401(k) after the six-month hiatus.

What remains the same

Some things haven’t changed. Hardship withdrawals are still subject to a 10% tax penalty, along with regular income tax. This combination could take a substantial bite out of the amount withdrawn, effectively forcing account holders to take out more dollars than they otherwise would have to, so as to wind up with the same net amount.

The BBA also didn’t change the reasons for which hardship withdrawals can be made. According to the IRS, such a withdrawal “must be made because of an immediate and heavy financial need of the employee and the amount must be necessary to satisfy the financial need.” This can include the need of an employee’s spouse or dependent, as well as that of a nonspouse, nondependent beneficiary.

The agency has said that the meaning of “immediate and heavy” depends on the facts of the situation and assumes the employee doesn’t have any other way to meet the need. Examples offered by the IRS include:

If your organization sponsors a 401(k) plan that permits hardship withdrawals, be sure to read up on all the details related to the BBA’s changes. Our firm can provide more information and further guidance.

Retirement plan early withdrawals: Make sure you meet the requirements to avoid a penalty

Many tax limits affecting businesses have increased for 2023